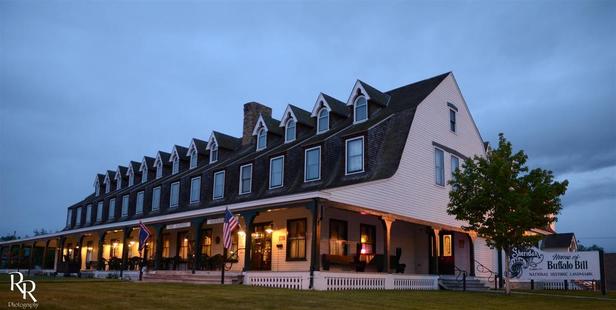 From Buffalo Bill Cody's "Wild West Show" to Earnest Hemmingway's  "A Farewell to Arms" to "Brokeback Mountain" to the Broadway hit musical "A Gentleman’s Guide to Love and Murder," Sheridan, Wyoming has a rich and impressive history of creative culture. Thanks to the Ucross Foundation and Jentel Arts Foundation artists' residencies, and a local community that values artistic innovation, visual artists and performing artists of all stripes are attracted to the Sheridan area to take advantage of the creative inspiration encountered in our idyllic western setting at the base of the Big Horn Mountains.

Sheridan’s modern performance history began in the local bars, brothels and inns of the Wild West. It was at the still-standing Sheridan Inn that Buffalo Bill Cody and Annie Oakley ran auditions for his world-renowned "Wild West Show." Even today, on the porch of the Sheridan Inn, visitors can dine and consider the events that inspired the musical “Annie Get Your Gun.”

Many years later, at the historic Mint Bar on Sheridan’s Main Street, Annie Proulx’s observations of local ranch hands sparked the creation of "Brokeback Mountain." The bar is still serving drinks to a diverse crowd of thirsty thespians and ranchers and is a “must see” location for those visiting Sheridan.

Just up the mountain from the Mint Bar sits Spear-O-Wigwam Ranch, where young Ernest Hemingway wrote his first draft of "A Farewell to Arms" in 1928. Today, this guest ranch is maintained by Sheridan College as an outdoor learning campus where musicians, poets, novelists, playwrights, visual artists and students have access to the same environment which inspired Hemingway to say “There are two places I love: Africa and Wyoming.”

The local Ucross Foundation, located on a 20,000 acre ranch, has supported the writing of an impressive number of modern plays and musicals. The Sundance Institute Playwrights Retreat at Ucross Foundation has hosted many award-winning playwrights, lyricists, and composers since 1999. Among them are Annie Baker, Andrew Lippa, Octavio Solis, Diana Son, Doug Wright, and Paula Vogel.  "A Gentleman’s Guide to Love & Murder" also benefited from the creative energy available in the sunlight and shadow of the Big Horn Mountains.

For several years, the Jentel Arts Foundation has provided artist residencies for visual artists and writers of all stripes. Among others, Jentel recently hosted PJ Paparelli, playwright and late artistic director of the American Theater Company in Chicago.

Sheridan is especially proud of its long tradition of theater production. Since its inception in 1957, the Sheridan Civic Theater Guild has been producing continuously, making it one of the oldest theater companies in the American West. The WYO Theater, the oldest vaudeville house in the state, was in danger of demolition in 1982. Local citizens rebelled and a massive fundraising campaign to “Save the WYO!” paid for a remodel worth $2.9 million in today’s currency and reopened the theater in 1989. In 2014, the WYO Theater was again remodeled, adding additional wing space, a new fly system, and increased stage lighting capacity. The theater now presents a mix of local productions, road shows, and children’s entertainment from Tandem Productions, which offers young local actors their chance in the spotlight.

In an era where performance spaces are closing across the nation, Sheridan’s community leaders recognize the value of our area’s performing arts and are constantly expanding our town’s creative capacity with new facilities. In 2014, the Mars Black Box Theater was constructed as part of the WYO Theater. In 2018, Sheridan’s downtown Performing Arts District is constructing a new dance studio, expanded theater offices, a technical theater laboratory, and several rehearsal spaces. In addition, in 2016, the local Whitney  Benefits foundation completed construction on a new 400+ seat recital hall and greatly expanded visual arts facilities on the Sheridan College campus. And then there is the recently expanded Brinton Museum with its singular collection of Native American art, Wyoming art and artifacts, and rotating galleries. Also, SAGE Community Arts moved to new, upgraded downtown digs in 2017. These projects are the physical manifestations of our community’s commitment to, and appreciation of, all those who create the performances and art which so enhance our life experience.

With expanding facilities, community support, and an established performing arts culture, a theater festival was inevitable. There is currently an urgent need for new play development and play revitalization opportunities. This need, combined with our local artist residencies and new facilities, made the encouragement of new works and the revitalization of existing works a natural fit for the Wyoming Theater Festival's mission.